In the first post of what will be a regular feature of BPPA Members telling the story behind a photo, BPPA Member Peter Macdiarmid, photographer London News Pictures, talks about …. Boris goes for a run ….
It’s not often that a press photograph leads the news agenda, but it does happen now and again.
I have been working as a press photographer for 31 years starting out on local newspapers in south London then progressing to The Independent, The Daily Telegraph, Reuters and 10 years as senior news photographer at Getty Images. Currently I work at London News Pictures, covering news and politics.
For me news photography is a passion and I put a lot of time and effort into looking for different images that catch the reader’s attention and illustrate a story in a unique, and hopefully original way. Sometimes this approach can make an ordinary image really stand out.
With this in mind I went looking for former foreign secretary Boris Johnson at his Oxfordshire home during last week’s Conservative Party Conference. Thinking that Boris would leave his house and head up the M40 to Birmingham for the second day of conference I positioned myself in the road outside by his driveway. Usually Boris will give a happy wave to any reporters and photographers as he gets into his car, but today I was on my own.
A short while after the sunrise began to cut through the October chill I spotted Boris leaving for an early morning run wearing his usual flowery shorts. I managed to capture a cheery wave before he disappeared down the lane that leads to the farmland surrounding his house. Normal practice, when there is a group of press doorstepping Boris, is to wait for his return and photograph him running up the lane back home, but today I decided to make use of the golden hour sunrise.
Having not ventured out into the nearby fields previously, I had to make an educated guess as to his return route. I located a spot that would enable me to photograph him crossing a path edged with long grass between two ploughed fields before turning left towards me.
I had guessed correctly and a few minutes later Boris emerged from the woodland leading to the path. He spotted me and waved. Sometimes he waves without looking up, and on this occasion he was also half raising his other arm for balance, all of which made a rather unusual image. He then jogged past me on his way home. 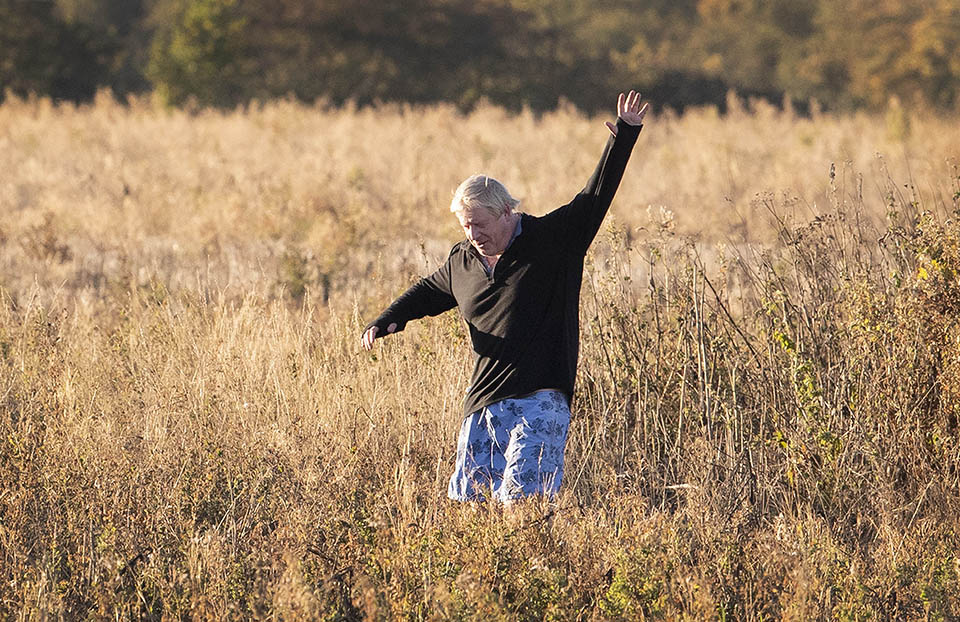 © Licensed to London News Pictures. 01/10/2018. Thame, UK. Boris Johnson waves at photographers as he runs near his Oxfordshire home. The former foreign secretary is due to attend Conservative Party Conference this week. Photo credit: Peter Macdiarmid/LNP

Rather pleased that I had found a different way of photographing the MP that was the talking point of the Conservative Party Conference, I set off back to the car to edit and transmit my images.
Within a couple of hours the images started to appear online, but with a headline that was markedly different to my caption ‘Boris Johnson waves as he runs through fields near his Oxfordshire home’. The Mirror online headline was ‘Boris Johnson commits greatest trolling in world history by running through a FIELD OF WHEAT’…. referring to the Prime Minister’s confession that the ‘naughtiest thing she has ever done’ was to ‘run through a field of wheat as a child’
My images of a man out jogging in the morning sunshine began to take on a life of their own. I spent the rest of the day fielding calls from ITV, Channel 5, BBC TV, CNN International and German TV asking for the picture for news bulletins. Multiple newspaper online websites were publishing my pictures and it was being talked about on radio bulletins by lunchtime. That day’s Evening Standard ran it on page one and another inside.
Tuesday’s papers ran the image across four front pages and on inside pages too. 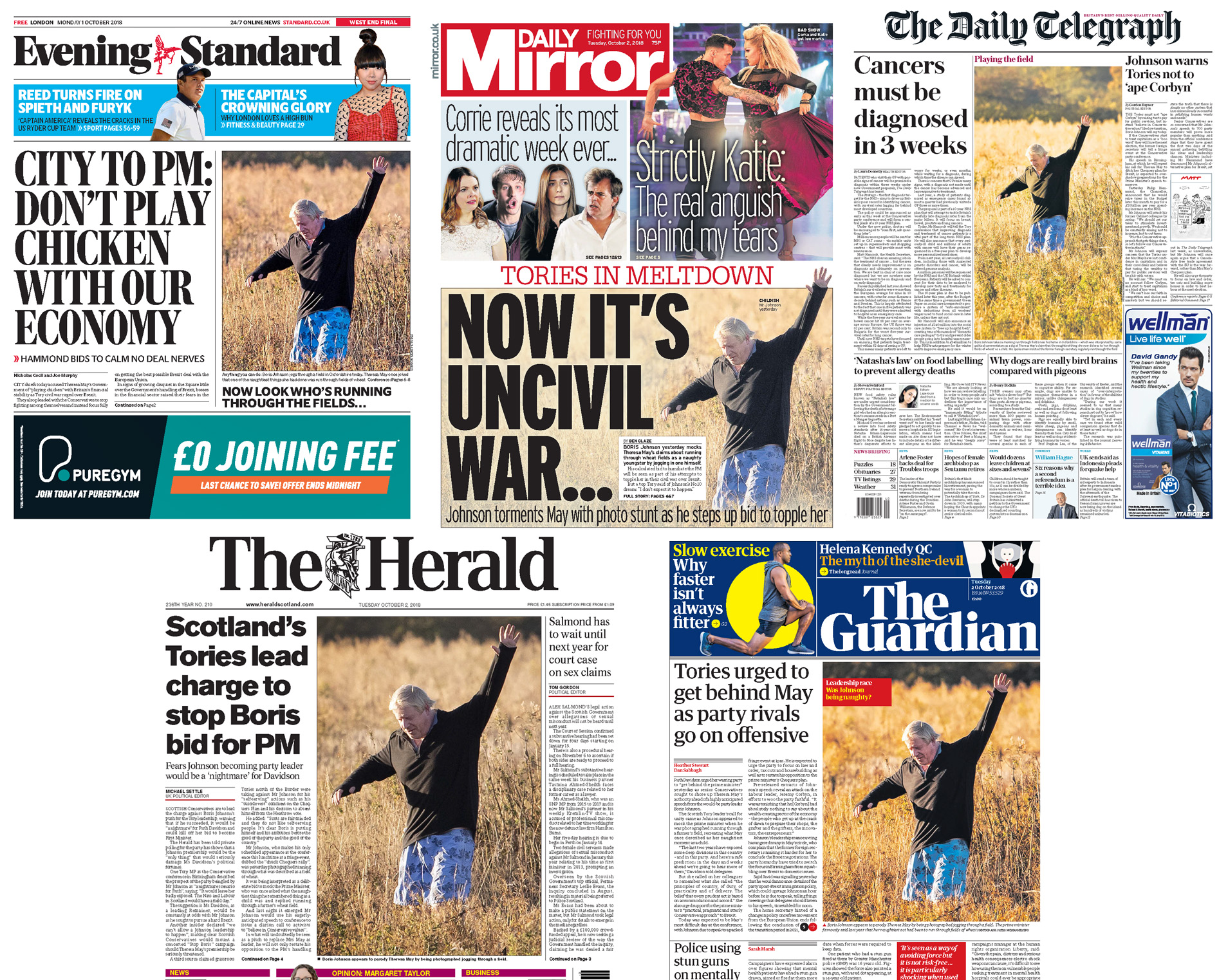 I have received a few phone calls asking me if it was a stunt – as you can see – it wasn’t.
Peter Macdiarmid
London News Pictures
(Visited 250 time, 1 visit today)
thebppaMembers Stories: Boris goes for a run…10.10.2018