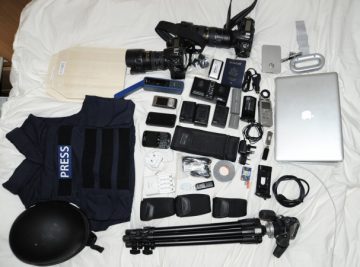 You may think that because the war is over, it is much safer and easier to report from Libya, but that is not necessarily the case. This post is written after my third trip to the country, the first being in February 2011 at the start of the war and the second in November 2011, one month after the death of Colonel Gaddafi.
After waiting almost a month to get my visa, I finally had it in hand. I spent the next few days getting ready and packing. First order of business was to buy insurance that covers war zones through Reporters Without Borders. Secondly, I got my two medical kits together. One contained basic medication such as paracetamol, immodium, plasters, etc. The other was a much more intense emergency kit containing syringes, a blood transfusion kit, extra needles, gloves, bandages, and a tourniquet, among others.
I also packed a set of body armour. I own a soft armour vest, which protects against any handgun round, shotgun pellets, and most knives. The soft armour is made of Kevlar, which gram for gram is five times stronger than steel. However, you are totally out of luck if anyone shoots you with an AK-47 or any kind of rifle. In order to protect against rifle rounds, you need hard armour plates. As these are £200 plus per plate, I borrowed them from a friend. They weigh 1.8 kg each and you need two of them. Each plate can stop six rounds from an AK-47. I’m sure it could probably stop seven or eight rounds, but I wouldn’t want to be the one to test it! As a whole the vest weighs a bit over 10 kg, and that is using ultra lightweight plates. I also brought a NIJ IIIa ballistic helmet for good measure, also borrowed from the same generous, safety concious friend. Whilst I never wore it, I was very happy to have it!
Importantly, for communication within Libya, I packed an iPhone which was to used for tweeting, shooting video and recording audio, a Blackberry (unlocked to use a local SIM card…), a small Nokia mobile phone as a backup and a satellite phone. I did not pack a BGAN (Broadband Global Area Network) which is what the BBC and other networks use to report live from anywhere in the world. Photographers also use them to file, but it is incredibly expensive if you the one footing the bill. It costs £1000 to buy, then £4 plus per megabyte sent or received. Very quickly I could easily rack up a few hundred pounds  BGAN bill in a day or two, so it is best to stick to the mobile/broadband basics.
Once packed it was time to head to the airport. I usually carry on my body armour, but was forced by the airline to check it, fortunately they let me keep my 15 kg camera bag…
Tripoli Airport is semi functional. The gates didn’t work and you needed to use air stairs to get on and off of the plane. It looks like it hadn’t been cleaned in years. And don’t use the bathrooms….by far the worst airport bathroom I have ever experienced! I was quickly through immigration but was unfortunately stopped for a bag search which is incredibly time consuming. One of the passengers who I got talking to on the plane, was returning to Libya for the first time in 30 years and I was kicking myself for not being there for the moment he returned. However, he was very generous and invited me over for dinner and offered me a ride to my hotel.
Once checked into my hotel, it was time to find working broadband, as my hotel didn’t have it. Even if I was lucky enough to have it, the broadband in my last hotel was practically useless to file on. My goal was to find broadband relatively close to Martyr’s Square in Tripoli. It was extremely challenging to file without a BGAN, and almost comically, I reached Plan H before I got success………!

Plan A: Use broadband at the cafe around the corner from my hotel and the square.

Result: Success! Until they packed up and left….while I was in the middle of uploading files…

On the big day, Friday, I spent much of the day in and around Martyr’s Square alternating between down in the square and up on one of the former intelligence buildings, where I was using Al-Arabyia’s internet connection. It was an amazing experience to be in the square with the 15,000 or so people celebrating. A number of women asked to have their photos taken during the celebrations, which I of course did. It is quite rare to have the opportunity to photograph women in the Arab world, so I took every opportunity I had.

Even with broadband on the roof it was difficult to file…and not because of the connection. Lets just say electrical wiring in Libya isn’t up to any sort of standard. Because my laptop battery was low, I needed to stay plugged in while editing to let it charge. Unfortunately, my laptop is metal and there was only one available outlet, which shocked me every time I touched the computer. It wasn’t bad, but was enough to cause my fingers to convulse and give a nice prickly feeling. I had to work through it though as I had no other choice and was very happy when I was done editing! In addition to being electrocuted whilst editing, I had to keep one eye on my surroundings. There was no gunfire in the air as it has been banned, but people were launching fireworks in all directions and some were exploding just metres from the building! I did my final upload around midnight, which was interrupted when Al-Arabyia packed up and went home, pulling the broadband in the middle of an upload!

While on the rooftop I met a commander in the Army who insisted on showing my photos of special forces training. I asked if I could come along on Sunday and photograph them. He said that was OK with him. However, he neglected to tell me they were on holiday until Thursday and I was to be in Benghazi by then.
Saturday evening, one of my fixers, Mego, took me to a street party in Tripoli. It was yet again a huge party atmosphere complete with western music, lights, homemade flamethrowers with lots and lots of horn honking. I was even offered alcohol, which is illegal in Libya. I didn’t take up the offer as much of it is homebrewed and will likely kill you because it contains methanol! All in all it was a lot of fun and quite the experience to party with them and something that never would have been allowed during Gaddafi’s regime.

Sunday morning, I booked a ticket to Benghazi and then walked around Ba Al-Azizia, Gaddafi’s former compound, with my other fixer, Mo. The destruction was immense. Almost all of it was destroyed by NATO bombing. Surprisingly, the few buildings still standing had been occupied by families and were being converted into homes. After a few hours taking photos, it was time for dinner and to head to the airport on what was the last flight of the day. To say security is lax would be an understatement. Bag isn’t weighed, your boarding pass is blank and it really isnt a problem if you are travelling with loads of liquids and set off the metal detector!

My trip to Benghazi was mainly to see people who helped me during the war against Gaddafi, who I hadn’t seen in almost a year. But I was also trying to photograph some of the military training I wasn’t able to in Tripoli. After two days of getting the runaround between both militias and the NTC Army, I was allowed to photograph at a NTC base in Benghazi where recruits were being trained and also signing up to join the fledgling force, albeit very reluctantly. They agreed to let me photograph as long as I didn’t disclose the exact location, write any names and show them the photos before I left the base, to which I agreed. The base commander took me and my translator around the base and I got some standard photos of people being trained. However, upon leaving we were stopped by a man other than the base commander and I was forced to delete the photographs in front of him because I didn’t have the correct paperwork. Of course no one could tell me exactly the kind of paperwork I needed, or where it could be obtained…!? I was also threatened by one of the men, who somehow knew who I was, which was a bit disconcerting, saying if I didn’t return with the correct paperwork I would disappear along with the papers. He also claimed to have some of my camera gear, which was taken at gunpoint by pro-Gaddafi forces in late February of last year!? It just got weirder and weirder! It wasn’t covered under my insurance, so of course I wanted to get it back, but after being threatened by him, I decided it wasn’t worth pursuing……
Annoyed, but not really frightened, we left. The photographs have been recovered from the memory card, but won’t be published. I spent the evening at the war museum in Benghazi, letting off some stress and playing around with the fully functional, but not loaded, rocket launchers and other home-built weaponry at the museum.
My translator told me the same man who threatened me came looking for me to talk to me and I was a bit unsure whether or not I would be stopped at the airport or found when I left my hotel, but thankfully I made it through security and on to the plane. Finally, as the engines roared and the wheels left the ground, I could breathe a sigh of relief…but not for too long as my translator wasn’t leaving the country for another few days. Thankfully, he made it out and his family still in Benghazi are also safe.
You may also be wondering, what does a trip like this actually cost!? Well I’ve totalled up the costs for you below:
Flights from London to Tripoli via Cairo, Benghazi via Cairo, to London : £426.00
Flight from Tripoli to Benghazi : £30.00Flight from Tripoli to Benghazi : £30.00
Hotels : £450.00
Food : £100.00

Note : This doesn’t include costs for fixers, drivers, translators etc, as mine were friends and didn’t cost me anything, besides feeding and housing them when travelling. However, they generally cost around $100 per day.