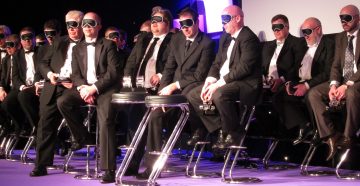 I have just returned from another wonderful weekend in Dublin, as guest of the Press Photographers Association of Ireland (PPAI) and Allied Irish Bank (AIB) for the AIB Photojournalism Awards 2012. The ceremony was on Friday night, but two days in the fantastic bars and restaurants takes it’s toll so I’m a bit late with this report!
Have a look at the list of winners, they are spectacular, a brilliant spread of photographs that myself and fellow judges Peter Macdiarmid and Dermot O’Shea felt were the best of the best. That of course is where the rub is, judging is a dangerous thing to do. I’ve done it before and I’m more than aware of the pitfalls. This time was no exception.

Judging is a subjective art. One man’s Page One is another man’s Page Eleven. It happens to me as a photographer every day, as I’m sure it does with all photographers, not just in Ireland and the United Kingdom, but all around the world. All one can do as a judge, is offer an opinion. Obviously, there are certain photographs that everyone sees as ‘no brainers’ . Photographs that everyone says are without a shadow of doubt, ‘THE’ picture of the day. In my experience this is not the case. Opinions vary and that is the only fact about competitions. The whole process makes you feel a bit more sympathetic towards picture editors in general.
Without going into specifics there were certain pictures that lost out to others because they did not quite fulfill the definition of that particular category….pictures that I and the other judges actually preferred. But if a category’s name asks for a specific discipline and the ‘best’ picture does not define that discipline, then how can you (no matter how much you love it….) fairly award the prize to that picture? Rules are rules and they are specific to category definitions. I stand by my choices.
On arrival we were jokingly asked “if we’d brought flak jackets…?” and “had we noticed the targets that had magically appeared on our backs….?” Even where we were seated in a room of about three hundred black-tied guests, was explained to us as ‘arranged’ so we could see where the missiles were coming from! Needless to say this was all good-hearted ribbing, well, that’s what I’m sticking to…..

The real spectacle of the evening was how the PPAI unveiled the overall winner. At the start of the evening, the stage was covered in empty bar-stools. By the end, each stool was sat on by a winner. Each winner was blindfolded. It looked like a group version of ‘Take Me Out’! However, the winners were not asked questions about how they would rock the questioner’s boat, instead they had to sit there while the overall winner’s portfolio was screened behind them. There were a few screams from the audience, but watching closely as I did, nobody seemed to be able to guess who the winner was!? Eventually, Julien Behal of The Press Association of Ireland was announced as Photojournalist Of The Year. Well done Julien, it was a great set!

The real work starts now for The PPAI. The sponsors AIB are starting a nationwide tour from this Monday of the winning photographs all around Ireland to as many of their branches as possible. It’s a fantastic way of bringing the work that members do back to the grassroots. Letting people all over Ireland realise what the job is about. As I’ve said before, I believe this is why press photography is so well thought of in the Republic Of Ireland. It was a great experience judging and being a guest at the Awards. Sorry to those we didn’t pick.
On a personal note, I wish we could have an awards ceremony as well respected in the United Kingdom. I’d even be happy for Paddy McGuinness to MC the whole event! And obviously, I would supply the blindfolds…..!