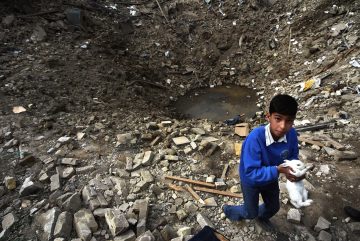 Photo: © Sean Smith/The Guardian.
Shortly after UNSEEN closed at Inside Space we put out a call to members saying that “UNSEEN was just a warm up” asking them to dig back through their archives to the time when the last of the three Assignments books was published. That date coincided with the fall of the Berlin Wall and we were working on a major retrospective covering just over fourteen years. Members submitted over 3,500 pictures which were edited, re-edited and pared down to just a few hundred. Five Thousand Days was born. Under the guidance of the Books and Exhibitions sub-committee the project became one of the most impressive and best selling photographic books of the past few years and an outstanding exhibition in The Lyttleton Foyer of the Royal National Theatre – running from the 11th of October 2004 until the 4th of December. The show was specifically designed for the space but in January 2004 it successfully transferred to Bradford’s Museum of Industry for a one month stay.