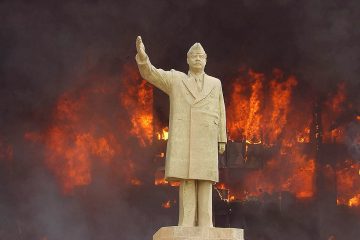 Photo: © Peter Nicholls/The Times.
In May 2003 we were handed a chance to hold an exhibition in a central London Gallery at very short notice. In a little under three weeks we had formed an exhibitions sub-committee, called for and received a large number of submissions and put the exhibition together. UNSEEN featured 90 photographs that had never been seen before. Many of them had been overlooked by picture editors, some were shot as part of private projects and others had been too late for deadlines. All of the images were top class and the exhibition opened on time with not one but two private views and an impressive catalogue. Versions and edits of the show have since been seen at Focus on Imaging (2004), on The SS Robin in London’s Docklands, at the offices of PR company BORKOWSKI and at the Xandra Rhodes Gallery of The Kent Institute of Art & Design.