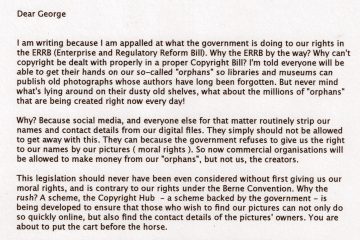 Today is the day when the UK Government could vote to include a seemingly innocuous clause in an otherwise largely uncontroversial piece of legislation that will not only harm our industry but also place this country at odds with a vital international treaty. It is upsetting, bizarre and unnecessary to the point of being farcical.
The BPPA has been trying very hard to get the Government to see sense and drop the copyright clause from the Enterprise Regulatory Reform Bill for a while now. In a world where the intervention of a celebrity can unclog jams and open doors we decided to ask UK Photography’s biggest celebrity, David Bailey, to write to cabinet members on behalf of all owners and creators of intellectual property. He decided to write to George Osborne MP, The Chancellor of the Exchequer personally and he has given us permission to circulate that letter as widely as we wish – and here it is…
The text of the letter in full:
Dear George
I am writing because I am appalled at what the government is doing to our rights in the ERRB (Enterprise and Regulatory Reform Bill). Why the ERRB by the way? Why can’t copyright be dealt with properly in a proper Copyright Bill? I’m told everyone will be able to get their hands on our so-called “orphans” so libraries and museums can publish old photographs whose authors have long been forgotten. But never mind what’s lying around on dusty old shelves, what about the millions of “orphans” that are being created now every day!
Why? Because social media, and everyone else for that matter routinely strip our names and contact details from our digital files. They simply should not be allowed to get away with this. They can because our government refuses to give us the right to our names by our pictures (Moral rights). So now commercial organisations will be allowed to make money from our “orphans”, but not us, the creators.
This legislation should never have been even considered without first giving us our moral rights, and is contrary to our rights under the Berne Convention. Why the rush? A scheme, the Copyright Hub – a scheme backed by the government – is being developed to ensure that those who wish to find our pictures can not only do so quickly online, but also find the contact details of the pictures’ owners. You are about to put the cart before the horse.
I’m told the real reason for speed is that “releasing” orphans will create growth. We all understand the need for growth. But where’s the evidence? The seemingly impressive financial figures presented originally in the Hargreaves Review have mysteriously had to be revised – down by 97%! Which now apparently amount to no more than 80p per taxpayer per year. Given the damage this legislation will now cause to taxpaying creators, damage no-one has so far taken into account, the effect of this legislation on economic growth will in fact be negative.
It’s not too late to think again!
Best,
David Bailey