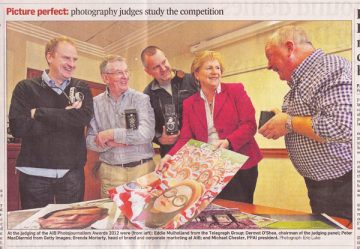 I’ve been to a mystical land! It’s a land where press photographers are loved and feted. They are considered professionals whose role is vital to the nation. They are not abused on the streets and the Head Of State, the President,  joins them for dinner when they have their annual awards ceremony, the winner of which is whisked away in a limo’ for a live prime time television interview. They are interviewed again for breakfast television and their winning photograph is plastered all over the national newspapers. One previous winner told me how he and a colleague were given a civic reception in their home town the year they won. To get there you just head north, turn left at Birmingham and keep on going.  You’ll probably need a boat or a plane, but it’s not as far as you think.
If you think I’m talking about the U.S.A then you are wrong! This land of dreams, where our profession is so loved is in fact the Republic Of  Ireland.
I’ve just returned from Dublin, after three days of judging the Press Photographer’s Association of Ireland ‘AIB Photojournalism Awards 2012’, along with my colleague photographer Peter Macdiarmid from Getty Images and legendary former picture editor of The Irish Times, Dermot O’Shea. We spent a fantastic weekend going through the cream of Irish press photography. The decisions were hard to make, but we were happy to spend the hours in a darkened room because the photography was just amazing. The results are almost a state secret, only to be revealed in February at the gala black tie dinner attended by non other than the Irish President Michael Higgins himself! Peter and myself were treated like visiting dignitaries and taken to the best restaurants and bars in Dublin, where the reception was never anything other than fiercely friendly. We are both looking forward to returning for the main event.

The thing that struck us both during the visit and which spurred me on to writing this, my first ever blog post, was how different the atmosphere was around the subject of press photography in Ireland. It really is respected, all the things I mentioned at the start of this post are true. On the final day of judging we were visited in the hotel, where the judging was taking place, by six photographers from the Irish national press for a photocall and on the following day the readers were put off their breakfast by our (mine and Pete’s) ugly mugs staring back at them. These national papers will also run massive spreads after the winners have been announced. The winner, as I said earlier, is taken to be interviewed on ‘The Late Late Show’, Ireland’s highest rated and most prestigious television show on RTE. This is fantastic support and publicity for the world of photojournalism and it is quite obviously paying dividends evident in the Irish public’s attitude to our job. The sponsor, Allied Irish Bank (AIB) must take a great deal of the credit too. They tour the exhibition to their branches around the country bringing this high quality work to the grassroots. Small communities getting the chance to see the work of the country’s finest. AIB also marry the tour to local festivals, so the photography becomes part of community events. It’s a simple idea but brilliantly effective because it makes people feel part of our job. It’s there for them to see in their high street.
Bearing all this in mind makes you wonder. Could we TheBPPA do the same !? Maybe we would need a fairy godmother sponsor? The work involved in touring any exhibition is daunting and probably beyond a volunteer lead organisation at the moment, but the publicity in other areas of the media must be achievable. We’ve got friends in television, why can’t we get them onside!? We all mostly work for newspapers and magazines, why can’t we get them to do spreads of member’s work when we have a completed project? I used to do ‘vox pops’ with Boris Johnson, surely City Hall is a prime exhibition space?We need ideas and we need everyone to get behind the cause…….
Whatever we do we’d better do it fast! The Leveson Inquiry set up following the phone hacking scandal, was very quick to turn it’s guns on press photographers. It’s easy to see why….we are ‘low hanging fruit’. The visible face of journalism. We stand on the street, we don’t hide in an office. We come face to face with the public and from experience I can tell you they are not big fans. We need to win them over. We need them to understand that we are there to serve them. We are there to show them what’s going on.
Andrew Wiard, a fellow TheBPPA board member and respected photojournalist, coined this brilliant phrase at a recent meeting when he said, “We are the eyes of the public..”
All we have to do now is work to get them to see it!