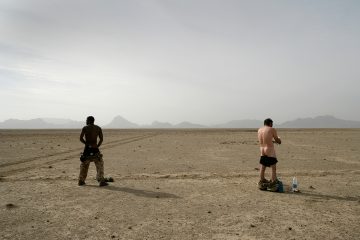 Here’s what the late, great Sir David English, who created the modern Daily Mail, had to say about newspaper photographers. (thanks to Dave Parker)

” Press photographers are a strange breed. Moody, enthusiastic, temperamental, excitable, humorous, self-deprecating . They are in many ways the most interesting collection of people to be found on any national newspaper. More interesting frequently than the star bylined writers. More interesting than the gossip columnists with their fund of inside chatter. More interesting even than the showbiz kings with their stories of rubbing shoulders with the great and their `all life´s a cocktail party´ philosophy. Photographers are the shock troops of journalism. They cannot muse. They cannot pontificate. They cannot sit in the office and get their stories by telephone. Nor do they pick up their scoops over lunch. They have to be where the action is. They have to be there! ”

And here’s what Roy Greenslade Professor (no less) of journalism had to say about newspaper photographers.

“Everyone can, and does, take photographs as a matter of rote nowadays.No event occurs – fires, fetes, road accidents, cats up trees, whatever – without someone being on hand to snap a picture. In the real sense of the word, newspaper photographers are therefore redundant.

I concede that standing outside court for ages to capture an image of a defendant or witness may still require a professional (enter the experienced freelance). Otherwise, for the general run of the news diary, anyone can do it.”

I think we all know who has/had the better understanding of the qualities required to do the job .

The idea that because almost everyone has a camera and takes pictures means you no longer need photographers has a logical conclusion. Almost everyone can write and has a pen.

Newspapers are always on the look out to cut costs… to make a few more quid for the shareholders. I mean you wouldn’t expect them to have last year’s reg car would you. But no business will ever profit by making cuts. That’s short-termism. You have to speculate and invest to accumulate. That’s not just my opinion. Ask billionaire Warren Buffet. Stupid managements make stupid cuts which affect their product the newspaper. The product suffers and the advertisers leave in droves driving profit further down. Stupid management then implement more cuts to increase the dividend which affects the product and the advertisers leave in droves driving profit down further. It’s a cycle of stupidity.

The demand for visuals is higher than it has ever been. More photographs and videos are used than ever before. Newspaper websites need photographs, 360’s, time-lapses, videos, slideshows….these are the things that attract an audience and advertisers.

So who are the best people to deliver these things. Easy answer really. It’s not the columnists.

It’s us. The photographers.