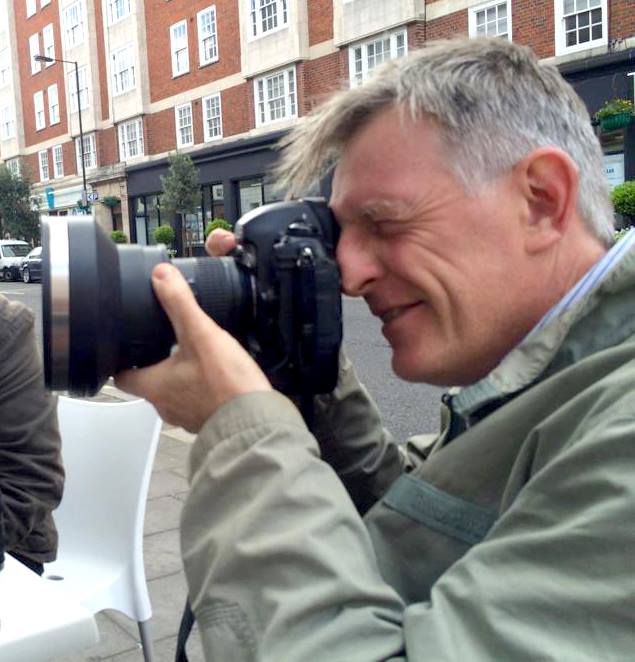 My first interest in photography was at the start of my teenage years when, with my brand new Russian made Zenith camera, I would spend hours walking around my home tome of Marlow-on-Thames photographing everything and anything in hazy black and white, sending the film off and awaiting the prints with mounting excitement about a week later.

After getting a job at a well known chemists on their photographic counter, I had access to all the film and processing I could need, this was all during the late 1970’s and early 80’s where unions, strikes and politics dominated the news and Mrs Thatcher was Prime Minister.

After saving up and buying my first ‘proper’ camera, a Nikon FM, nothing could stop me. In between shifts on the photographic counter, I would take the train into London, photographing demos, political rallies, celebrity arrivals and the departure of the task force to the Falklands in Portsmouth.

It was soon after that I learned of the full time Photojournalism course at Sheffield where they took 12 students a year and trained them in the basics of press photography. I was lucky enough to be accepted and spent a hectic year under the influence of our madcap, but inspiring tutor, Paul Delmar.

It so happened that Sheffield was the centre of the Miner’s dispute as the National Union of Mineworkers had their HQ in Sheffield and the nearby colliery, Orgreave, was just a couple of miles from the college.  One Monday in June, there was rumoured to be a mass confrontation between the Police and the miners, so I decided to not turn up for my exam that morning and  headed to the colliery.  The scene was of a medieval battle with horses, wooden stakes, burning debris and bloody fighting – It turned out to be ‘Bloody Monday’ which was the pitched battle between the Police and miners and where Arthur Scargill, the President of the NUM was felled by a blow from a Police truncheon.  There were only three of us there at that moment and I was soon met by a flustered Daily Star photographer who had just arrived and who had missed this pivotal moment. I was happy to give him my films and my pictures appeared the the Daily Star the next day with a fee of £50. I was berated by the lecturers the next day for not turning up, by taken aside by Paul Delmar and told that he would have done exactly the same and well done.

At the time, the course was recognised by local papers as the place to go for trainee press photographers and I got a job immediately on leaving the course at the newly reinstated Kentish Independent newspaper in Woolwich, run by two journalist brothers who bought the ailing newspaper. After a truly mad year on this effective start-up, which involved folding several thousand sheets of the paper as a printing contract had not been checked to include folding and sorting, delivering them to newsagents as that contract had been forgotten, making our own adverts to fill blank pages as we had no advertisers, hiring models to work as receptionists, also employing Boy George’s brother as my fellow photographer and all night parties in the office most nights, I knew this was the life for me….

It was all too good to be true and the paper folded within a year, but I managed to get on to a  big London local paper, The South London Press, which propelled me into the day to day life of local newspaper coverage, developing film and printing each time I returned from a job .  Having a large and vibrant area to cover, it was great experience.

Not long afterwards I left and started to freelance for all the main London papers at the same time, The Evening News, Evening Standard, and the London Daily News with occasional shifts for the Daily Express, just along the corridor from the Standard on the 2nd floor of the their building in Fleet Street.

After the Evening News and the London Daily News folded, I found myself working almost exclusively for the Daily Express. As the new recruit, I was spending most of my time picking up all the last minute and unsocial hours jobs, but it was a great feeling to be working for a national newspaper, with some renowned staff photographers.

One of them, John Downing, took me under his wing and I was very grateful for his help. He also told me of a new organisation, the PPA which had been recently started up to represent British Press Photographers and to show their work in exhibitions.  I was persuaded to join, but could immediately see the benefits of actually getting members of the profession to other face to face, before the internet, even for a social occasion.

After ten years at the Express, I was offered a coveted staff job which I hastily accepted.  Since the beginning of my career at the Daily Expres, some 31 years later, I have been lucky enough to cover some of the major news events together with wars, disaster, famine, crime, politics and more or less everything else this job throws at you as well as travelling around the world to do it.

During this this time, the BPPA was formed by dedicated press photographers determined in it’s vital role of representing our combined voices and recognising our joint talent by showing the general public the breadth, diversity and quality of our work in the form of regular exhibitions and competitions which has achieved national recognition.

I was happily coerced into joining the BPPA at a late stage, but again see the need for a professional body to represent us in these changing times and I am happy to be a part of this important organisation..