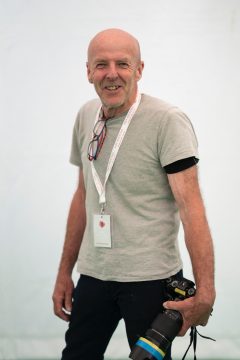 Tragic news. The day after Keith was reported missing, a body was found in the sea, near Aberystwyth.

Many would know his byline, but fewer would have met the man. I saw him a couple of times a year, and my memory is of not just a very talented photographer, but a mate who was always laughing. He really did have that joie de vivre that some people are gifted with. Rarely travelling outside of Aberystwyth, he nevertheless had pictures published in the national papers nearly every week via Alamy and LNP. His ‘murmurations of starlings over the pier in the sunset’ were a staple of most papers.

Based for nearly his whole career on the west coast of Wales in Aberystwyth, Keith made a living photographing the local community and all of it’s activities. What made him special though, was his ability to see a picture that was of local interest, and transcend it into an image that the national press would want to use. He was an incredibly hard working freelance, but was happy to share his knowledge with others, who wanted to learn the secrets of successful stock photography.

Almost uniquely he made a great success of his career without ever feeling the need to travel far from his home town. His enthusiasm knew no bounds, night after night he would return to the same locations, to capture variants on his famous sunset over the pier pictures. A prolific operator, he has over 25,000 pictures on Alamy.

After his death, dozens of tributes have appeared on social media from those he had photographed in the town. It seems everybody in Aber’ knew him.

I first got to know his work well during the great storms of 2013, when his weather pictures made the front pages day after day. Ironically, it seems that the great waves that he captured in all their glory, were what claimed him in the end.

Keith leaves a wife Gilly, two daughters, and a grandson.