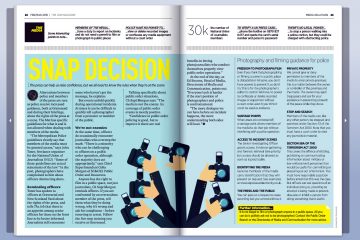 There have been a number of versions of the media guidelines from many different police forces over the last dozen years. We have previously made the version developed with The BPPA, the NUJ and the CIoJ available on our website and, following the publication of an article quoting the Met’s guidelines verbatim in their in-house magazine “The Job” we are happy to re-publish them here. Of course these are Metropolotan Police guidelines but they are the same as those agreed by ACPO (the Association of Chief Police Officers) and so they should be equally valid right across the United Kingdom. You can view and download a scanned PDF copy of the pamphlet available to Metropolitan Police Staff from our resources section.

This is the only UK-wide press card recognised by all broadcast and written news media and the police service. It is only carried by professional news gatherers such as reporters, photographers, TV,cameramen, sound recordists and by direct support staff such as dispatch riders, engineers and drivers. Foreign journalists based in the UK can also carry the card.

The copyright design is owned by the UK Press Card Authority Ltd. Most cards carry one
of the logos shown here but some use the logo of the holder’s publication or broadcaster.

The card is made in the same way as a photo card driving licence and has several security features. There is a UK Press Card Authority hologram next to the word PRESS. Most cards also have a graphic on the reverse showing it is Smart Card enabled. Verify the match by telephoning 0870 8376 477. And check the expiry date – no card is valid for more than two years.

News gatherers do nor have to carry the card. You may need to use a alternative means of identifying the person.

Contact with photographers, reporters and television crews is a regular occurrence for many officers and staff. The media influences our reputation so it’s important to maintain good working relations even in difficult circumstances.

This guide is designed to help you ensure both the police and the media can fulfil their duties without hindering each other.

Members of the media have a duty to report on incidents and do not need a permit to film or photograph in public places.

Police have no power or moral responsibility to stop them filming or photographing incidents or police personnel. lt is a matter for journalists and their editors to control what is published or broadcast, not the police. Once images are recorded we have no power to delete them or confiscate any equipment without a court order even if we think they contain damaging or useful evidence.

We should actively help the media carry out their responsibilities provided they don’t interfere with ours. When areas are cordoned off following an incident, creating a vantage point where members of the media at the scene can see police activity can help them do their job without interfering with a police operation. Providing a vantage point does not prevent media still reporting from areas accessible to the general public.

The Senior Investigating Officer is in charge of granting members of the media access to incident scenes. In the early stages of investigation evidence gathering and forensic retrieval take priority over media access, but, where appropriate, access should be allowed as is practicable.

Genuine members of the media will usually carry identification, for instance the UK Press Card, which they will present on request.

Many amateur or “citizen journalists” now carry out a legitimate news gathering role and are unlikely to have special identification. Such news gatherers have the same rights and freedoms as the professional media.

The press and the public

If someone distressed or bereaved asks the police to stop the media recording them, the request can be passed on to the media, but not enforced.

To accompany the police onto private property the media must first obtain permission, which must be recorded, from the owner or controller of the property.

We cannot give or deny permission to members of the media to enter private premises whether they are involved in police operations or not. This is a matter between the owner or controller of the premises and the media.

If the media are trespassing on private property the owner or controller of the premises may eject them and ask for your assistance in preventing a breach of the peace while they do so.

Stop and Search under the Terrorism Act 2000

Officers are encouraged to be vigilant against terrorism but must recognise the balance between effective policing and protecting Londoners and respecting the rights of the media to take photographs.

The power to stop and search someone under Section 44 of the Terrorism Act 2000 no longer exists.

Police officers continue to have the power to stop and search anyone who they reasonably suspect to be a terrorist under Section 43 of the Terrorism Act.

Members of the media can, like any other person, be stopped and searched under Section 43 of the Terrorism Act 2000 if an officer reasonably suspects that they are a terrorist. However, where it is clear that the person being searched is a journalist, officers should exercise caution before viewing images as images acquired or created for the purposes of journalism may constitute journalistic material and should not be viewed without a court order.

Section 58a of the Terrorism Act 2000 covers the offence of eliciting, publishing or communicating information about members of the armed forces, intelligence services or police of a kind likely to be useful to a person committing or preparing an act of terrorism.

It would ordinarily be unlawful to use Section 58a to arrest people photographing police officers in the course of normal policing activities, including protests because there would not normally be grounds for suspecting that the photographs were being taken to provide assistance to a terrorist. An arrest would only be lawful if an arresting officer had a reasonable suspicion that the photographs were being taken in order to provide practical assistance to a person committing or preparing an act of terrorism.

There is however nothing preventing officers asking questions of an individual who appears to be taking photographs of someone who is or has been a member of Her Majesty’s Forces (HMF), Intelligence Services or a constable so long as this is being done for a lawful purpose and is not being done in a way that prevents. dissuades or inhibits the individual from doing something which is not unlawful.

It is a statutory defence for a person to prove that they had a reasonable excuse for eliciting, publishing or communicating the relevant information. Legitimate journalistic activity is likely to constitute such an excuse.

All the UK’s professional reporters photographers and broadcast crews are eligible for a UK Press Card which can be used to identify genuine news gatherers.

The photograph and design integrated into the structure of the card. Every card carries the logo of the issuing organisation or the holder’s employer and a UKPCA hologram together with the holder’s name and card serial number.

Each photo card has a unique serial number, and each cardholder has a separate password. To verify the card and its holder phone the hotline quoting the serial number and password: 087O 8376477.

News gatherers do not have to carry the card so you may need to use alternative means to identify them.

The UK Press Card Scheme has been in operation since the early 1990s when it was set up to provide a single, national identity card for professional news gatherers. lt is managed by the UK Press Card Authority Limited, UKPCA is supported by all main media organisations, associations and trade unions. A list of designated gatekeepers is available on www.ukpresscardauthority.co.uk or through the Press Bureau at New ScotlandYard.