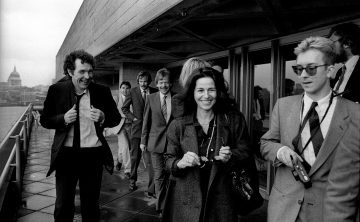 Sally Soames and fellow members of The Press Photographers Association (which became The BPPA) at their first London exhibition at The Barbican. Photo ©Brian Harris. Sally Soames who worked as a photographer for The Sunday Times for more than three decades died aged 82 at her home in north London on the 5th of October 2019. Sally, like many of her generation had no formal training as