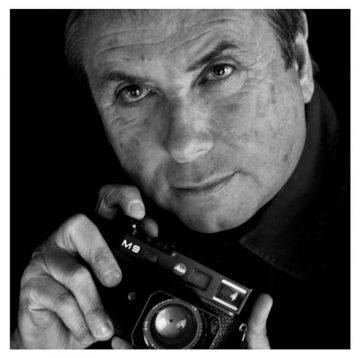 Tom Stoddart was a very open man in his work, ready to generously share his experiences, his knowledge, his thoughts and wisdom from a remarkable career at the very front of Fleet Street’s finest, working for so many differing news organisations and outlets, from national tabloids and broadsheets in the UK, to news magazines and agencies all over the world.

So yesterday it was for me, and so many others, a profound sense of shock when I was called by The BPPA Secretary Neil Turner with the news Tom had died. Neil asked that the news be kept within a close circle of friends at the request of the family, and that we shouldn’t post anything on social media.

For though Tom was so well known by so many within our profession, spanning generations of photographers, both those who worked alongside him, and those younger who have been inspired and emboldened by meeting him, and seeing his work, in his personal life he was a very private man.

And of all the friends and colleagues I’ve spoken to over the last 48 hours, not one had any idea our friend was fighting cancer.

Tom Stoddart represented the very best of us, working in news from tabloids to broadsheets, and later magazines shooting some astonishing imagery. But he always found time for others, to encourage, to inspire, and back in the day on the road for UK nationals, to help out a colleague.

It means there is so much for so many of us to recall, me joining him on the site of an Alpine coach crash on a Saturday, quietly greeting me with a nod, he with that boxer stance, feet apart, and looking away back and forth as he staccato de-briefed me in his strong Geordie voice, his pictures safely filed to the office deadline for his paper The Sunday Times. He had no special reason to help this young guy from his sister paper The Times, but he did, tipping me off on what he thought might make a picture for me ‘Sunday for Monday’.

Later years, after an injury sustained covering a war zone, Tom joined us on the Sunday Telegraph when I worked the picture desk. Tom was doing ‘light duties’, and it was my occasional privilege to brief him, and edit his ‘contacts’. Later I will never forget the pictures he filed to us from Sarajevo and then the first free elections in South Africa. Now exhibited and in books all over the world, these images were a ‘first use’ for us on the Sunday Telegraph and I recall the gasps even from the hardened hacks in our newsroom as they came in.

He was a brilliant photographer with the most extraordinary gift, but never once let you know it.

Jeff Moore, past Chair of The BPPA, remembers the man who never said no when asked if he would get involved in our Association projects, present an award, judge some pictures, attend an event.

“I remember the first time I met Tom and him coming up to me saying that me and him ‘were the youngest.’ Of course I knew he had to be older than me, he’d been a hero to me for a long time, back when I first started photography. I was astounded he was so nice and I was really pleased. He was so encouraging. I didn’t expect him to come up and just start talking to me, as I was then, a young agency photographer just starting.”

Peter Summers, The BPPA Young Photographer of the Year, recalls “Tom was always there to offer support and encouragement, and how it was a real boost seeing he’d messaged you about a photo or liked something on Instagram or Twitter.”

A former picture editor back then new to his role at The Sunday Times remembers being alarmed with having to brief Tom with an exceptionally dull diary job on a Saturday morning. He’d just had a big row with another contract photographer who had turned the assignment down, and in a typical busy desk style, he called the next name on the list. “Tom listened in silence, he knew it was crap, I knew it was crap, but it had to be done. He didn’t complain or comment. But there was an ominous silence and I had already had a slagging off from one of our ‘star photographers’. Ok, Tom said, but send a bike. It was his way of telling me he was doing me a favour without making me feel a complete arse.”

Sir Don McCullin said that “I hear this news with great sadness. Not only a friend, but Tom was one of the great documentary photographers of his generations with an honesty and compassion that shown through his work.”

Jeff Moore recalls “. I don’t think I ever had a conversation with Tom about photography. But as a true freelance, Tom truly only worked for the people he photographed. His work was for them to tell them their story. Everything he did had integrity and humanity. Not only a great photographer but a fine human being.”

“But though he didn’t tell me this being around him and seeing his pictures I know this to be true….”

“Whether joyful or a moment of terror when people allow you into their lives you kind of have a contract with that person. You have to be truthful and honest and use your integrity to tell the story.”

“Tom Stoddart made thousands of those contracts in his career and he never broke it once.”