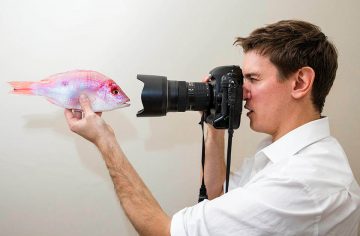 On the left we have a Snapper, it’s a type of fish, on the right we have a photographer – please learn the difference.
Would you like to demean everything I have achieved in my career with one word? Great! Then just call me a snapper – you won’t be the first or the last person to do it.
With few exceptions, the term snapper is used as a description for photographers by almost everyone we work with – from journalists, to PR professionals, picture editors and other press photographers. What began as a jokey phrase used amongst photographers has been taken from us and turned into a widely accepted description of what we do.
Often when I bring this subject up the reply I get back is something along the lines of “What’s your problem? It’s just a word. I think it’s quite fun”. Well, here’s my problem…the term implies that our sole contribution at work is to own a camera and turn up on time. In nobody’s dictionary is a snap considered to be something that took any skill or input to achieve – it is without a doubt a derogatory term when used to describe a photo.
Of course, most people using the do not really believe we are just taking ‘snaps’. I’ve heard the term used by many colleagues and clients who I know to have a great respect for, and understanding of, what we do. But the term has slowly seeped into our collective consciousness and rarely gets questioned. Whether the person using them intends it or not, some words are loaded with meaning.
One defence of the word I’ve often heard is: “Well OK, obviously some of you guys are photographers, like those who do reportage and high end portraiture – but you can’t exactly call waiting outside court or a night club and taking a few snaps of someone leaving photography”. Yes you can. If you think having five seconds (that’s not an exaggeration) to get a sharp picture of someone running towards you in the dark isn’t a skill then I suggest you try it for yourself. Afterwards you’ll need to talk to quite a few people to make sure that you’ve identified the right person in your photo. But it’s just a snap so maybe don’t worry about that part too much, eh?
Some of my colleagues will no doubt think that I am getting carried away over an insignificant and almost endearing term. And they might compare me to a cabbie who would like to be know as an Executive Transportation Route Consultant (sorry cabbies – if that’s what you want, then that’s fine by me!). Indeed, the online forum where the majority of Britain’s working press photographers discuss their profession is called Snapperweb, so obviously not everyone feels the same way as me.
But I believe if press photography as a profession is going survive the transition to online then we need to learn to acknowledge and communicate to others the contribution we make to journalism – and the language we use is a powerful symbol to the wider world as to how we view ourselves.
Despite what some people will have you believe, press photography is alive and well – most of the space in our national newspapers and news website is given over to photographs and most of these photographs are taken by professional news photographers and not amateurs. This tells you all you need to know about the power of the still image and the skill of the people taking these pictures. Yet shift rates have remained the same for over a decade, the public view our profession with complete disdain and staff positions are almost unheard of. That tells me that as a profession we do not have the power or influence that is commensurate with the contribution we make – stopping using the term “snapper” to refer to ourselves is a small, easy step we can take towards rectify that situation.
So then, just to sum up – a snapper is a type of fish and not a press photographer. Spread the word!
I’d love to hear your thoughts, whatever side you take in this debate. Leave a comment below or tweet me and the association – @mikaelbuck and @TheBPPA
The views expressed here are solely my own and do not necessarily represent the views of The BPPA.
You can see Mikael’s gallery page here.