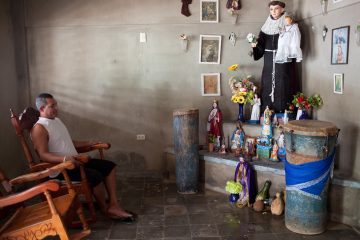 It goes without saying that the business is now unrecognisable from the one that I entered in the early 1990s. Then, the structure was relatively linear and there was a clear defining path to an editorial career. Now, every photographer has to be a brand and use social media to shout their wares and tout their abilities. It isn’t even clear what editorial or documentary photography actually is anymore.

I’ve talked before about a ‘bleed’ from the art world and as previous postings on this site seem to indicate, a good deal of photographic education now wraps itself in talk of ‘practice’ and pseudo academic language.

As an editorial photographer and one that works in a documentary tradition, I’m actually delighted that new ways of seeing are being utilised but I’ve always tried to make work that is simple and engaging. I firmly believe that if you’re photographing people in (often) difficult situations you have a duty to be clear and straightforward and that your work should be similar. Your work should be about the subject and not about you.

It’s hardly surprising then that there’s a good deal of confusion about how to progress within the business – or more crucially how to make pictures that won’t fade with current fashions but have a longevity that speaks to an audience with simplicity and crucially, I think, a beauty.

In the past, when I was stuck visually or with an issue of editing, I could ask older, wiser members of my agency for help and advice. That old agency structure has now by and large fallen (in some ways a positive step) and it often leaves people working in a vacuum.

Photography – documentary photography, photojournalism – whatever you call it, is analogous to its written cousin. It is fundamentally a craft that has elements that are worth learning. I’ve always thought that if you are trying to communicate with an audience by showing them the world (perhaps with a view to changing/challenging their opinions) your work must be clear and simple. That isn’t to say dull, but it must be engaging and understandable. There are so many images now and so many photographers producing them. If everyone’s a photographer then you have to make sure that even if your Tweeted voice isn’t the loudest, the work that you produce is the absolute best it can be.

Over the last decade I’ve had dozens and dozens of young (and some not so young) photographers writing to me to ask if they can assist me or just get feedback on their work. I certainly don’t have all the answers, but if someone sends me a half decent email I‘ve always responded and if I’m in the UK, often arranged to meet.

Phil Clarke-Hill emailed me several years ago to ask my honest opinion of his images. We met up several times and it was clear that although he had talent and a strong desire to shoot, he wasn’t as focussed as he could be and his way of shooting was too loose. Some of his frames had a picture in them desperately trying to get out.

I had him shoot some exercises, I lent him an old lens. I set him a project to work on. I made him change where he stood. I made him look up some photographers that I really admired and crucially explained why I thought their images worked and still work. Moreover, I made him aware of authors that wrote beautiful reportage. I’m convinced that there is a symbiosis within all journalism and in the best practitioners there is an erudition, a refinement, a clear, simple way of communicating a story to an audience that transcends the medium.

Phil listened and really engaged. He started to make pictures that were clearer and that said what he wanted them to say – images that could be read visually. Two years later, he’s in a very different place. He’s shooting assignments for good magazines and specialising in South America – especially Brazil. He regularly emails and sends me stuff and asks advice about the things that don’t often get discussed – travel, visas, logistics, pitching – essentially, being a professional. He’s just about to make a book and has an exhibition soon. It’s surprised me how much I’ve enjoyed the process myself – seeing someone benefit from my experiences and (many) mistakes.

Someone else that I’ve worked with over the last couple of years is the young Bangladeshi photographer Farzana Hossen. I taught a workshop in Chittagong four years ago for the Pathshala Institute for a group of local and visiting Norwegian young photojournalists.

Farzana, it was clear, was an exceptional photographer with an inherent and classical visual sense and she was full of questions – not about ‘how’ but ‘why’. The series that she was working on, about her own family, was both mature and subtle. Her next work about violence against women in Cairo was more straightforward visually but much more complicated to shoot. We spoke over email and ‘phone about the logistics and dangers of the work (during the 2013 demonstrations) and I did my best to advise on fixers and contacts for her work. Later that year when she came to London I helped edit her project on acid attack survivors that won her the Ian Parry Award.

Currently, I’m working with a photographer in New Delhi (where I’m still partly based) and another in the UK. What’s really interesting for me, is that I feel the process has invigorated my own work. I have a new book out next year and I can honestly say that some of that work was influenced as much by working with (and learning from) several younger photographers. It may be clichéd but it’s true that it’s been enormously gratifying to be able to help someone and pass on what (limited) knowledge I have.

My mentoring isn’t intended to be a competitor to a University course – many of which I’ve guest lectured at – I see it as guidance for people who are actually trying to work in an industry that is both confusing and constantly moving.

Stuart Freedman is a Freelance Photojournalist and Mentor who points out that his degree is in Politics rather than photography. His website is http://www.stuartfreedman.com/mentoring/