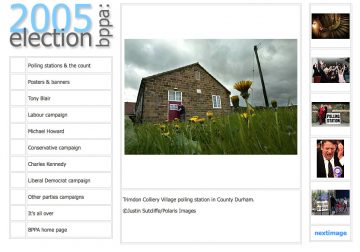 It has been a while since we ran a major project. At a recent meeting of The Association’s Board we decided that the upcoming UK General Election would be the perfect opportunity to right that wrong. We are inviting all members of The BPPA to get ready to submit photographs for this project which will start off as a web gallery and then, all being well, become something more.
Back in 2005 we ran a very succesful project which ended up with the arresting title “Never Mind The Ballots”. It started out as a web gallery but then became an exhibition which showed at the Palace of Westminster and on board the SS Robin which was moored at Canary Wharf. The summary of that show said this:

“The images collected in ‘Never Mind The Ballots’ express the sheer banality of the May 2005 general election. But more than this, they demonstrate the skill and determination of BPPA members who were able to produce excellent photographs under such tedious and stultifying conditions.

This was one of the most stage-managed, spin-driven and least visually interesting British elections of modern times. An event during which the nation’s press photographers faced months of ten-minute photo-calls and frustratingly regular delays in their quest to find interesting and significant images. This exhibition is both a celebration of the achievements under such conditions and a critique of those monstrous circumstances themselves; proof that vital and arresting shots are there despite the adverse efforts of political parties to regulate and normalize content.”

We have the strong suspicion that nothing will have changed apart from even greater pressure on news photographers to supply pictures in greater quantities, to tighter rolling deadlines and against even greater efforts from the political party machines to control what we do.
Railing against that control is something that press photographers do well and this project is a great opportunity to show off those pictures – especially those that may never be seen elsewhere.
Watch out for some interesting and creative work.