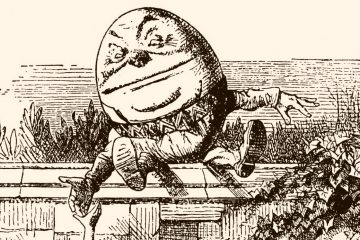 In this second part of his assessment of what is happening with DACS, Andrew Wiard explains why the current situation is not something that photographers should accept.

“When I use a word,” Humpty Dumpty said, in rather a scornful tone, “it means just what I choose it to mean—neither more nor less.”

Insisting on ALL secondary rights – does it really matter? Is it such a big deal?
Yes it is, but first, what exactly are these secondary rights everyone is talking about? Fact is you will not find a concise legal, or any precise, definition anywhere (or if you find one, please let me know). They can be defined negatively – they are those rights which are not primary. And primary rights are? For want of a better definition, the rights we exercise directly ourselves.This is how DACS describes, not defines, but describes secondary rights: those “ it would be impractical for you to license……. on an individual basis ”. At first sight all sounds plain common sense. Our primary rights  are those we exercise individually and directly (or through our agents) and as for photocopying, well, that’s best left to DACS. That’s secondary.
But hang on, who decides what rights it is impractical for us to license, and how? What’s secondary and what’s not? Photocopying is pretty obvious, but where is the line drawn and can we trust those who draw it?
Take the strange case of the European “Memorandum of Understanding”.  I first wrote about this for the Stop43 website.  The point here (and I’m afraid you really do have to plough through all that to get it) is that the signatories to this European memorandum were plotting to consign our *primary* rights to collecting societies (you should also read DACS’s reply). The idea behind the MoU was  to republish out-of-print works, for the benefit of humankind of course, if the authors or publishers do not do so themselves. Their rights would have to be taken into account, but then what to do with embedded works, works embedded on the printed page?
Embedded Works? – photographs, to you and me. Ah, the solution is obvious – collecting societies!
Why? Why? If any publisher, any publisher, whoever they are, wishes to produce a new edition of a book containing a photograph which I have already licensed directly once, all I have to do is – do it again. Negotiate a further licence. Directly. Any photographer who supplies books for a living will do this as a matter of course. By any definition, we are not talking secondary rights here. These are primary rights. Our rights. Not secondary rights, the rights which according to DACS, are those it is “impractical for us to license on an individual basis”. But the rights we know perfectly well how to license directly ourselves. No doubt the publishers of out-of-print works will find dealing with us tiresome. All publishers find licensing any works tiresome. But however secondary rights are defined, they are most certainly NOT those rights which publishers find it oh so inconvenient to have to license on an individual basis! And we have no idea what other rights of ours will be considered secondary in future. This is why it is so important that any secondary rights agreement spells out precisely what rights are referred to, and any additional rights to be collectively administered thereafter are specified, negotiated and agreed in advance, and agreed without the threat of money being withheld.
A gang of European collecting societies agreed to this. And our UK rep there? – yes, you guessed it, DACS. Which is why, in their reply referred to above, they are so keen to make out that the memorandum doesn’t say what it means when it says what it says – or rather, as DACS puts it, it is all subject to consultation: “ a collective management organisation for visual works (such as DACS) would be obliged to consult with rightsholders prior to any agreement being reached “. DACS would consult. But that doesn’t explain what on earth they were doing going along with all this in the first place. Consult, over our *primary* rights? And, anyone remember being consulted?
DACS, consult? Really? The way they consulted about this new agreement of theirs? It went like this. First they got a small number of important figures into a room, told them all about the forces of darkness (true) but that none of this could be publicly revealed for fear of (legal?) consequences. Utterly false. It’s all coming out now, but nothing we couldn’t have been told right at the start. These figures were then to go out and tell all photographers, without going into  details, that they must sign up. Which, BAPLA  excepted, they then did. The one thing DACS did not do was consult their contributors. They represent us individually. They were after individual signatures. They should have talked to us, individually.
Instead, a series of inducements, “prizes”, to get people to sign up before the annual deadline. I was offered a prize draw, where I “could win up to £250 in vouchers to spend on art and photography materials” . And if I were to recommend Payback to a friend, “we’ll offer you both the chance to win £150 to spend at on art or photography materials at Jackson’s Art Supplies or Metro Imaging”. Talk about desperation!
Are we adults or kids to be tempted with sweeties?
No mention, of course, in these emails, of the new contributor agreement which had to be signed as the last stage of completing the claims form, or of its significance. Those discussions were only for the chosen few. If you doubt that, look at what happened to the NUJ’s NEC member for photographers Pete Jenkins, who dared to ask them what was really going on. DACS first offered him a meeting before the signature deadline. Then withdrew the offer, refused to meet him, saying they’d be holding a meeting for a wider group after the deadline. After the deal was done and it was all over! And, after the deal? Pete naturally asked to come along but was then told no, they were full up, and they had what they thought was a wide enough range of interested parties already.
Translation – no awkward squad, thank you.
Just before Christmas I received an email from DACS.

“ With the introduction of a new Payback membership, we are now able to formally consult with you on issues concerning your rights, and importantly, safeguard your existing and future royalties.”

What nonsense. They’ve been able to consult us, formally or not, for months. Before, not after, we had to sign. They just didn’t want to.
Let’s be clear what they did. They announced a new agreement. They said they would consult. But not, of course, the individual photographers required to sign. They then stuck to what they said in the first place. The DACS take it or leave it discussion, followed by their take it or leave it agreement.
And what if we did not sign? The payouts last Christmas were for sums collected before last year, that is before this new agreement which has only now come into force, collecting for future payouts in Christmas 2015. DACS was clearly saying, no signature, no payout. You couldn’t complete your claim for this year without it. In other words, they were applying this agreement retrospectively, to enforce compliance. Signing under duress – legal? – well, which one of us had the time, the energy, and most of all the money, to find out?
So, there you have it – consultation, DACS style.
This is serious. DACS say they will consult in future about collecting any other secondary rights. I think I now know what that means. We have given them the power not only to interpret that word as they see fit, but to collect whatever they think falls into that category, and regardless of what we think. They say we can always withdraw our signature at a future date, but so what? Because what we have signed up to now will now in all likelihood give them, under the new ECL regulations, the power to collect the “secondary” rights of all photographers, whether signed up or not. So you can unsign if you like, but you’re going nowhere as DACS will just carry on collecting.
What to do? The law is an expensive but no longer the only way to bring collecting societies to heel. Under the new ECL regulations they have to behave. So the CLA thinks it can collect for pictures but not pay photographers? Time to shop them to the Secretary of State. That’s one way.
There’s another. It will become increasingly practical for us to collect directly. Cue Paul Ellis of Stop 43: “ The solution is obvious – the Copyright Hub, which when implemented will suddenly make a load of ‘secondary’ rights ‘primary’, because it will no longer be impossible for individual photographers to manage them.” The future should indeed lie with the Copyright Hub, see here: http://www.copyrighthub.co.uk/ .
That however is still under development, that is for the future, and today we are already trapped by our signatures. And did we really have a choice?  For there’s no doubt whatsoever that the  vultures are circling. This from DACS earlier this month:

“ In DACS’ view, the CLA is trying to use its market power to reduce the existing 8% share of its revenues that go to visual artists and possibly risk the future of the Payback scheme. DACS has insisted that the existing arrangement should continue until the end of September 2017. This will help manage the transition to any new arrangements and protect our members’ incomes in the interim. To date the CLA has not accepted this.”

The latest is that DACS has now, using the authority we have given them, forced the CLA to accept this – temporary – deal. Only a temporary deal, but a deal none the less.
For this we have paid a heavy price. Let’s be clear. DACS may be on our side. But we have just given a hostage to fortune.

“The question is,” said Alice, “whether you can make words mean so many different things.”

“The question is,” said Humpty Dumpty, “which is to be master—that’s all.”